Knights Templar to APIs - Banking for the masses

The usability of banking took a big leap, with the invention of branch office. In modern times, in the 12th century, the Templars created a network of branches, taking the banking business to where there is a need – for instance to middle east and England. They allowed the movement of funds, currency conversion, and ransom payments to happen smoothly in those days.

In recent times, a prominent feature of wild west town is an imposing bank building. This branch office provided a life line of credit to the local citizens. Along with rail road, post office, church, school, and news paper, bank branch provided the underpinnings of civilization. The building is meant to convey stability, a much needed quality, as fly-by-night operators running off with depositor’s money were common in those days. Bank of America is supposed to have spearheaded the growth of satellite branches in the US.

Credit cards changed the situation quite drastically, starting in the 60’s. You could charge the card for various purchases. In a way, it created an alternative to traditional cash. You are not using the cash, but the credit letter that the bank gave you in place of cash, in a fashion.

ATM’s changed even that situation. You can get cash when you need it – in a mall, in a super market, at a train station, and even in a casino. It truly untethered us from the branch office.

Internet: How it changed the banking

Considering that we have a way of carrying on transactions without even a branch office, do we really need branch office? That would the natural question that we may ask, looking at the trends.

As soon as internet became reliable, traditional banks have taken a different approach. They did not see it as a replacement to the existing channels, but yet another channel to serve customers. They created websites, exposing the online transactional systems and querying systems to the consumers. As technology, and adoption of technology improved, they improved the websites. They added even mobile apps.

In most situations, banks see these efforts augmenting their traditional channels. In fact, the biggest effort these days is to reconcile these different channels. Integration of data (for example, getting the same amount of balance on iPhone app or ATM), integration of processes (for example, starting a wire transfer online and finishing at the branch) are some of the challenges in this channel unification effort.

Modern banks have taken a different route. Since they have not established branch offices, they bypass that infrastructure, and make it a virtue. They offer better interest rates, better usability of the applications, and better customer service. For example, check out http://www.bankrate.com/compare-rates.aspx to see the best rates – they are offered by banks with no local branches. Bank Simple, which tries to offer superior technology service, has gained more $1B deposits within an year of opening, without any track record.

Surprisingly, a bank’s ability to attract customers is directly proportional to the number of branch offices they have in the neighborhood. [See: http://www.economist.com/node/21554746]. However, with the changing demographics, wider adoption of technology, and the pressure from different industries, the situation is changing.

Web 2.0: How it will change the banking

Whether banks view internet applications as an another channel, or the primary channel, the focus has been always about improving their applications: websites, mobile applications, internal applications. Yet, the biggest financial innovation of the early internet, PayPal, does none of that.

Technology wise speaking, PayPal succeeded in taking the ball where the game is, instead of insisting people come to its playground. It successfully integrated into several online store fronts. It is almost like it setup ATM’s all over the internet, at the moment of purchase.

When we look at other industries, we see the same trend. Instead of assuming the burden of developing the applications consumers want, they allow others to develop apps. With extreme segmentation, they allow multiple groups to develop and serve different segments as those groups seek to serve. In fact, several companies use API’s are a way to increase awareness with internal departments, external partners, and potential employees. They embrace it to such an extent, that they even hold hackathons to create apps.

In mid 90’s, I read a paper called, “It’s bits, stupid”, a take-off on Clinton’s “It’s economy, stupid”. The concept is that the telephone companies controlled the telephone applications from beginning to end. Want to introduce three way calling? You need to go and change the switch code, change the telephone handsets etc. Want to have call hunting? Again, you need to change code in the switch etc.

Compare it with internet, where it was only interested in pushing bits. Building the actual apps was left to the ecosystem. Internet, web, VOIP, Google hangouts – all these were result of that innovation. To think that SS7 could have been TCP/IP or even could have assumed the same openness as TCP/IP is unimaginable these days.

In fact, even in the staid old world of telephony, one of the most successful companies in creating an ecosystem is twilio. Using its API’s people have crafted different applications ranging for customer service apps, SMS apps, and helpdesk apps.

[Twilio has the ability to analysis of the calls – this app is put together on top of Twilio API’s. Copyright: Twilio.]

If Banks have to embrace this way of participating in a large ecosystem, they need to change the way they develop applications. They could take cues from successful companies like Twitter and Facebook. Twitter built its entire business through API’s allowing users to share stories, comment from within the applications. So did Facebook. Let us see how companies are embracing this philosophy of separation of core API’s and apps, .

When we look at companies that are successful at fostering an ecosystem where others can participate in developing applications, we find the following:

Even if the companies are not interested in exposing the APIs to general public, they are interested in going this route at least for internal audience. For one thing, in several large companies, different groups behave as perfect strangers – therefore, all the standard techniques of getting developers to adapt your platform and API’s apply here. For another, the technical and engineering advantages are increasingly in favor of this approach.

We can analyze the API economy from two different trends:

For banks, the API’s offer an interesting mix of privacy, convenience, security and trust. For instance, PayPal offers privacy (they need not know my cc number), trust (they can trust that PayPal will pay out and do any dispute management). The most popular with new web companies, stripe, offers both, without the burden of keeping track of payments, or regulatory compliance of keeping the CC numbers.

The tug-of-war we see these days is between these two: trust and privacy. Lot of people hate PayPal because they do not trust its track record as the arbitrator. That is, it is protecting privacy, even at the expense of trust. Cash for example, offers a good balance between trust and privacy. However, it is not convenient. Bitcoin offers perfect anonymity, and little less of trust. Banks offer great deal of trust, but little less anonymity.

[Does popularity = trust? At least in Bitcoin case, it seems to be so.]

The current generation is losing its trust in governments. With the rise of citizen journalism, governments are seen as cynic at best, or corrupt at worst. Banks, aligned to government through fiscal policies, are tainted by the same guilt. While the current business does not suffer, and even the future business – commercial and high net-worth business may not suffer, individuals may eventually find alternatives to banking.

Hopefully, with the right API’s banks will relinquish some of the power they hold, for which they are blamed. If all I am doing is facilitating a payment, then, I cannot be held responsible for the application built on it, correct? While the laws catch up to the creative frenzy of the internet, banks will end up focusing on providing safe, proven, trusted, and secure services.

Incidentally, banks already offer API’s, whether in proper technical form or not. They work with tax prep software to get the tax details. They work with aggregators like mint.com, sigfig.com, yodlee.com for the get the details of the user accounts for analytic purpose. Most of these aggregators built solutions to get the account details from banks, but lot of those solutions are brittle, without support from banks. 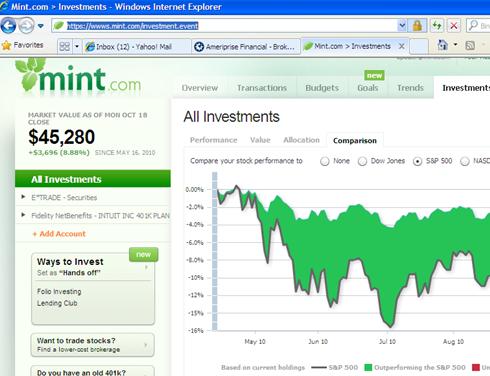 [Mint.com got the information from two accounts here: Etrade, Fidelity and showing the analysis].

Loosely speaking, APIs are SOA for the easy app development. Most modern API’s are simply JSON over HTTP. Typically, they are used directly from the web by:

For instance, consider this API for Stripe, a payment company:

Here, we included the stripe checkout.js library. We are including all the needed information with that call. The result should look like this:

In this scenario, the credit card number doesn’t even touch the local system. That means, PCI compliance does not apply to this site. The credit card information is handled by Stripe.

Architecturally, applications are converging to this broad pattern:

In this picture, the backend services are exposed by the API’s. With the rise of HTML5 and the front-end MVC, the architecture will look like this:

What it means is this: The API’s can directly be consumed by the browser based application. We do not really need server side page creation at all. For instance, I can develop a static shopping mall application with ability to track users, send mails, take payments, integrate with warehouse, all from within the browser, without writing any server side code!

This paradigm is becoming so successful, there are several companies that are catering to developing, documenting, managing, and delivering the API’s:

There are several other companies that have entered this already crowded market. If history is any indication, eventually, the technologies, tools, and skills that these companies are developing will become available for enterprises at competitive prices.

Other industries: How they embracing API’s

As you can see, several of these cloud services are available as API’s to integrate into applications. Google analytics lets apps track users. Qubole is used for big data services. Sendgrid lets apps send mails.

In the current crop of companies, there are several services that are cheap enough and modern enough for banks to be able to integrate into their applications. They can reduce the effort in developing comprehensive solutions and increase customer satisfaction. For example, Rightsignature offers easy way to get docs signed, with support for integration via API’s. Hubspot provides API’s to make use of its inbound marketing services. Qualaroo lets you design, target, and host surveys for your users easily. Spnnakr lets you offer segmented pricing.

Banking is evolving. By focusing on the essential services, it can foster new innovations from the community of users and companies. Currently, technology is embracing API’s as a way to integrate services from different providers to create new consumer applications. Banks may not be able to create such an ecosystem by themselves, but they can participate already existing ecosystems. By creating the right technology support via API’s, banks can offer the solutions that meets the needs of diverse audience with different demands on privacy, convenience, security, and trust.